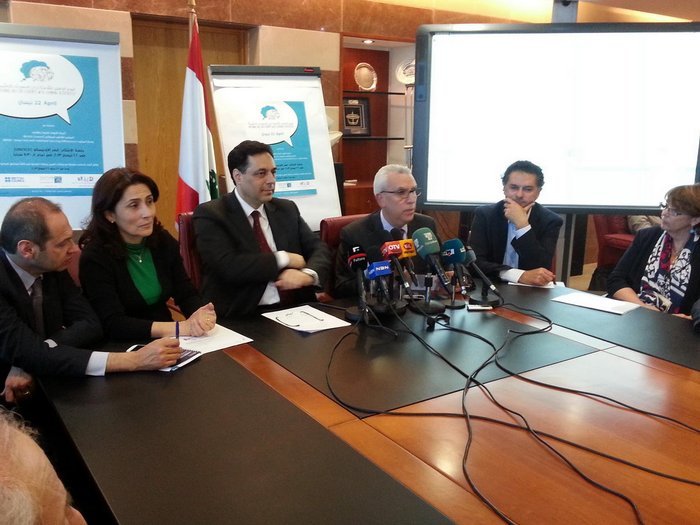 Press conference to announce the project of launching the National Day for Students with Learning Difficulties, and the accompanying workshops and awareness raising campaign, from April 22 until April 26.

On the occasion of the announcement of the project of launching the National Day for Students with Learning Difficulties, the Minister of Education and Higher Education, Professor Hassan Diab, held a press conference on April 3, 2013 at his office in the ministry.

The Press conference was in the presence of  The Country Director of the British Council in Lebanon, Mrs. Barbara Hewitt; Mr. Ragheb  Alameh; Dr. Leila Fayyad, the director of the Center for Educational Research and Development; Dr. Nabil Costa, the Coordinator of the Project of Launching the National Day for Students with Learning Difficulties and the Executive Director of “SKILD” center; in addition to a number of experts in the field of special education, representatives of institutions of special education, and representatives of the civil society.

After welcoming the audience, the minister of education delivered a word, in which he mentioned that despite the fact that Lebanon was one of the first in the Arab region to have signed the Convention on the Rights of the Child (CRC),  students with learning Difficulties are still suffering since schools refuse to admit them and since they are marginalized, and denounced the possibility of carrying on their studies, although they are able to learn.

The minister confirmed that inclusion is a fundamental right of the child, especially these students, knowing that the implementation of such a right is not impossible; yet it needs planning, preparing specialized experts and awareness. The minister reminded also the audience saying that the Ministry of Education took a few initiatives over the last few years where the Center for Educational Research and Development had an essential role, and although the results didn’t show yet, these initiatives constitutes important steps towards integration and awareness.

The minister commended also the initiatives taken by the civil society and some private educational institutions for raising awareness and assistance of students with special needs and students with learning difficulties through specialized educational programs. He also confirmed that the ministry supports efforts of the civil society, and has the predisposition to collaborate with organizations that support the integration and inclusion of these students.

Thereafter, the minister states: “Our presence here today shows that the political crisis and the resignation of the government neither deter nor impede the implementation of a new accomplishment carried out by the ministry towards the alleviation of the suffering of students with learning difficulties.” This accomplishment is the project of launching the National Day for Students with Learning Difficulties in collaboration with the center of “SKILD”, which is specialized in assisting and supporting students with learning difficulties, at the hands of a team of experts, who work with students from various schools in Lebanon for awareness raising, and with the British Council which effectively works at promoting integration and inclusion in Lebanon, and collaborates with experts from Great Britain. 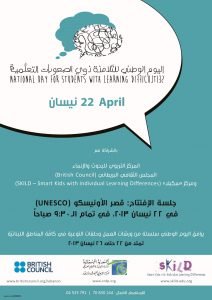 The minister announced that the launching day will be on April 22, 2013, at 9:30 a.m. in the UNESCO Palace. He also announced a series of workshops and an awareness raising campaign that will take place all over Lebanon, and will be delivered by experts from Great Britain and from Lebanon, right after the launching day, that is from April 22 to April 26, 2013.

At the end of his word, the minister emphasized that the journey is long and efforts should be multiplied by all people who are involved, and wished for more collaboration among the private sector and the public sector and non-governmental organizations, to end the suffering of students with learning difficulties.

After the word of the minister, came the word of the Country Director of the British Council in Lebanon, Mrs. Barbara Hewitt, who explained that the issue of students with learning difficulties and their integration and inclusion preoccupied decision-makers and politicians for a long time in Great Britain. Hence, and since the Council is established in Lebanon for support at the level of education, it has  highlighting for a while the subject of integration from a British perspective, and in collaboration with British experts in the field of integration and specialized education, and with educational experts in Lebanon. The British Council sought also to start exchange of expertise, which took place through educational activities such as the conference with the title: “Inclusion, Access, and Engagement: A UK perspective”, held by the Council in Abu Dhabi in February 2013. Mrs. Hewitt also announced similar activities, which the Council intends to prepare in the coming few months, especially the conference about integration in May, and a study tour for Lebanese policy makers in Great Britain, and for teachers and experts, whereby they will be introduced to British experts, and be able to inspect with close attention the issue of integration as it takes place in British educational institutions. Finally, Mrs. Hewitt emphasized that the Council is proud of its collaboration with “SKILD”, with the Ministry of Education and with the Center for Educational Research and Development. She also emphasized that the Council has a clear vision concerning the collaboration with “SKILD” and with the Education Center, and intends to carry on work in order to accomplish this vision.

After the Director of the British Council, Mr. Ragheb Alameh delivered his word, where he thanked the minister of education and the Center for Educational Research and Development for their care about students with learning difficulties. He emphasized the importance of facilitating the opportunities of the inclusion of these students in institutions of vocational studies and higher studies, because it is their right to study and become efficient citizens in society. Mr. Alameh mentioned that he has always been interested in the case of students with learning difficulties, and he exerts efforts to help them to overcome difficulties through educational institutions. He explained that experience showed that without the collaboration of parents with educational specialists there will be no success. Mr. Alameh added that he promises to offer every possible support for students with special needs and those with learning difficulties, whether material or immaterial, and at the level of raising awareness; and he added: “Since this day, and until an unstated time, I consider myself an ambassador on behalf of the case of students with learning difficulties.” Finally, he presented his special thankfulness to the center of “SKILD” and to the British Council, and called upon the media to give this case the scope of effective coverage it deserves for raising awareness.

At the end, there was a word delivered by the coordinator of the project of the launching of the National Day for Students with Learning Difficulties, and the director of the center of “SKILD”, Dr. Nabil Costa whereby he thanked the minister of education for his support for this initiative, and emphasized that the center is proud of the partnership with the ministry and with the British Council. He also thanked Mr. Ragheb Alameh and commended his enthusiasm for this case, and he expressed that he was touched by this enthusiasm. Dr. Costa also thanked Dr. Leila Fayyad and her team for their ceaseless support for enlightening the decision makers concerning the suffering of students with special needs and with learning difficulties, and for their hard work in order to include integration in the official curriculum.

Dr. Costa describes this day, the day of announcing the National Day, as a special day for students with learning difficulties, for their parents and for educational institutions, because of elevating the level of awareness, and because of the government started to care for their case; he said: “we’re lucky because the dream about our children having a better education and hence a better future is on the verge to come true.” The initiatives referred to in this press conference, especially the National Day, show that some people have come to have a genuine care, and exert ceaseless efforts in order that our children with learning difficulties may enjoy the opportunity of studying and integration. Finally, he said: “we come to have references and group of specialists in the civil society and in the official institutions, who secure a better future for our children, after they complete their studies and become capable of being efficient citizens.