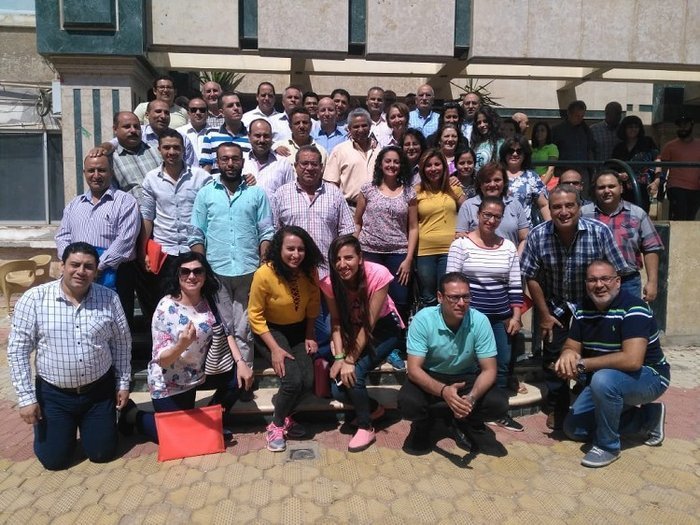 There has been much excitement from churches in the Middle East North Africa [MENA] region since the launch last year of Christianity Explored (CE) resources in Arabic by LSESD’s publishing arm Dar Manhal Al Hayat (DMAH).

Several teams from Christianity Explored in the UK have led training workshops in Lebanon and Egypt over the past year. John and Yolanda Ibbett are board members of CE were again in Egypt in September. They met more Christians deeply grateful that they could now use the internationally renowned Christianity Explored resources.

“One of our overriding impressions has been the hunger for this material in all the [MENA] countries,” says Yolanda. “When we launched a year ago, people stood up and they said, ‘Thank you. Thank you for coming. Thank you because we’ve prayed for 10 years that God will send us a tool like this.’

“You feel the sense of urgency, and we have something that is easy for them to use.”

The Arab world is desperate for new resources to share about Jesus with those who are seeking him. At each workshop participants receive Christianity Explored and Soul (aimed at young people) which are 7-week courses that enable seekers of the Christian faith to find out more by going through Mark’s Gospel and addressing three questions: Who is Jesus, why did Jesus come to earth, and what does it mean to follow him?

In each resource pack there is a leader’s guide, a participant’s guide and DVD. At the workshops, the CE team teach attendees how best to use the resources in their church and community. There is opportunity for discussion, for people to ask questions, and for worship and devotions too. “We show them the videos, we get them to do a study session, so that they will be inspired to go away and get on and start using it,” says Yolanda.

What John and Yolanda have found in Egypt especially is that churches are not only using CE for outreach but also to build up the faith and understanding of their members.

“We found that it is actually being used as a discipleship tool,” says Yolanda. “Within certain contexts, they’re teaching all their pastors and lay leaders how to study the Bible.

“Many of them are very poor, but they’re very active Christians and very committed,” she says. “They’re very eager to learn more and to share their faith. What we realized was, not only this workshop was about teaching them about the course and the theology behind it, but also blessing them. We gave them effectively a weekend away. They stayed overnight, they were up till late at night, all chatting amongst themselves. They were having a break, a rest.”

Many who have attended previous workshops speak of the impact that the CE resources have had. An attendee from Egypt, told us: “I enjoyed attending the CE workshop last year. I’ve also enjoyed teaching this course to many groups at my church. The age of the participants varied between 18 and 45. Their interaction with the content was great and very encouraging. Thank you so much for this great curriculum.”

And in Lebanon a pastor who is teaching the CE course at one church in the mountains, shared his feedback with us: “I would like to thank you for this precious tool,” he said. “This course is great, it is life-changing and thought-provoking. The interaction and discussions after watching the DVD are amazing.”

DMAH Publishing Director Sawsan Tannoury is pleased with the impact of CE so far and the success of the 8 workshops with the team in Egypt and Lebanon. “We continue to give thanks for the many ways the Lord has been using the CE & SOUL courses, and we look for more years of blessed partnership,” she says.

Please pray for all those who have been trained by the CE team as they use the Christianity Explored resources at their church with those that are seeking to know more about Jesus.