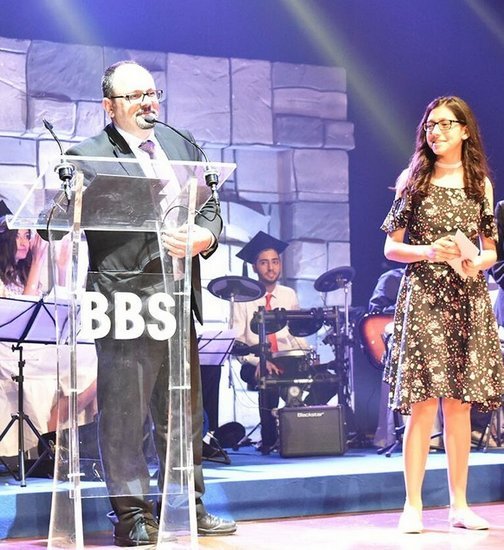 On June 30th, the Beirut Baptist School held its 55th commencement celebration for the Class of 2017, under the theme of “be the change.”

The event was opened with a prayer from Rev. Joseph Azzi, pastor of Mousseitbeh Baptist Church and a staged vignette featuring the graduating class building a wall saying “BBS,” symbolizing their years at the school “building their new home.”

Speakers at the event included Dr. Mohammad Halablab, president of the Parents’ Committee at the school, who encouraged the graduates to think of this day as the first time in the journey of life, and to never settle for less.

The commencement speech was given by Hoda Younan, the Country Manager for Lebanon and NEPA Indirect Markets at Microsoft, as a sign of the growing partnership between the school and the tech giant as part of ongoing e-Learning implementation plan at BBS. In her address to the graduates, Younan shared her appreciation of the school as “a place where characters are shaped with the values of God,” and emphasized the role of technology in equipping “doers and leaders” with 21st Century skills.

Three valedictorian speeches were given, representing the three divisions at the school (12G-General Sciences, 12X-Life Sciences and 12E-Social Sciences and Economics). For her part, Huda Ghosn spoke of the low number of girls in her department, reflecting still prevalent views that see engineering as “inappropriate for women,” but she insisted that despite the failure to secure a women’s quota in the new parliamentary elections law, one day “there will need to be a quota made for men.” Janna Berra, her colleague from the Life Sciences, promised her generation will “be accountable” to their peers and to society at large.

The event also featured six scholarships given to top achievers from lower grades, including one given to ninth grader Fawziya Zeitoun, who ranked 10th in Beirut and 18th in the whole of Lebanon in her official Brevet exams.

The ceremony ended with the passing of the school banner from the Class of 2017 to the Class of 2018, who pledged to hold fast to the values of BBS, before the graduates gathered one last time on stage to take part in a choreographed number to the music of Pink Floyd and Queen.