Child Friendly Spaces for Children Affected by the Syria Crisis 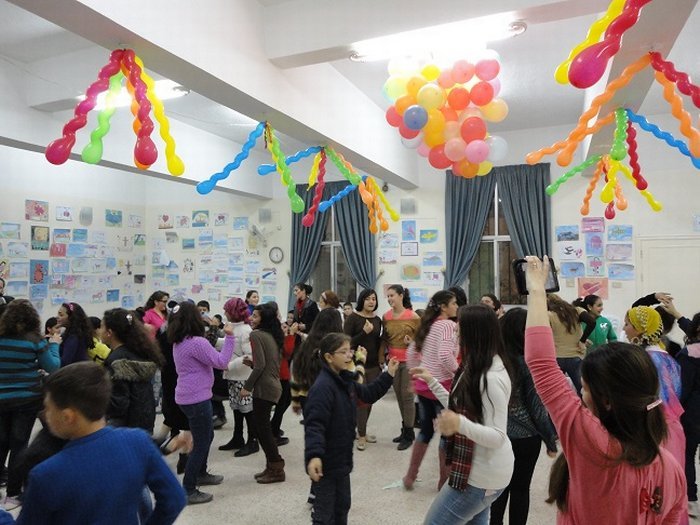 An 11 year-old boy was riding his man-sized bike, carrying a small gallon of heating fuel in one of the village streets when suddenly he slipped on the icy road and fell down with his load. The boy was in a panic, the people around were panicking as well and they all ran to him, but we were not worried about the child, but about the gallon of fuel that started to pour out, wasted on the street. We rushed to save the fuel for the boy because we all know how next to impossible it is to obtain it, and luckily, we were able to save half of it. The boy cried, the people cried, grown up men and women, and I cried too; and the reason wasn’t the boy’s bleeding elbow that he didn’t even care about; we cried for our painful life circumstances, our cold houses, and our difficulties providing for essential needs. Dear Partners, the Child Friendly Space is not only a place where children play and laugh, but a warm place where they can safely play and joyfully eat and enjoy every single activity we work on just to make them happier.

It was with this story that LSESD’s project coordinator inside Syria opened his most recent report on the work that they are doing in a small village outside of Homs.  This courageous young man continues to lead his team of caregivers in facilitating a Child Friendly Space (CFS), in partnership with the Fellowship of Middle East Evangelical Churches (FMEEC) and with funding through Open Doors, for 240 displaced and at-risk children. Though his entire family has fled to Europe, and terrorists continue to make advances towards Homs, he is choosing to stay for the sake of these children. “This is my dream job,” he says with a smile, “These are the best days of my life.”

While his palpable passion for the work is inspiring, it is equally evident that the stress of the current situation in Syria is inevitably taking its toll on both him and his team. Yet despite the many heartaches and challenges, it’s incredible to hear about the work that this group is doing. Through the CFS they provide children with a safe space to play and interact in a positive way, in addition to facilitating activities that promote psychosocial wellbeing, child development, protection, and health.  One of the most recent activities that they did with the children was “The Limits of My Body.”  During the activity the children lay down on a large piece of paper and had the outline of their bodies traced. Then each child marked with a green crayon where it is okay to be touched, and with a red crayon where it is not okay to be touched; followed by a role-playing exercise to teach children to say “STOP” when they feel that someone is approaching too close. This Child Protection activity is important training in an area where kidnappings and sexual assault have become a daily occurrence. Just last week one of the children reported to the coordinator that a man had tried to kidnap him in broad daylight. Another activity was in response to the recent outbreak of Hepatitis A in their area. One of the CFS caregivers, a pharmacologist by training, held an awareness session for the children on basic hygiene that they can practice to limit their risk of contracting Hep A.

In addition to planned activities, the CFS also provides opportunities for free play.  This is significant as all of the parents who participated in a recent Focus Group Discussion reported that what has changed most in their children since the start of the war is how they play. Since the outbreak of the conflict, the children’s games are only about weapons, fighting, and military checkpoints.  Furthermore, all of the mothers explained that before the war it was easy for their children to go out and have fun, but now they just sit at home.  The CFS is the only place they can safely play, and through structured and unstructured activities it encourages the children to develop and learn. Moreover, through regular discussion groups with the parents, the CFS has begun to serve more and more as a safe haven for the parents as well.  The  coordinator shares how the first time they brought the parents together they were all joking and laughing together- some had previously been neighbors in Homs and hadn’t seen one another since they were displaced.  “That was when it occurred to me,” he shared, “Maybe this is the only time they have to sit and socialize normally together.”  Furthermore, the parents report that they are happy with the results of the program, “What we see is our children are happy,” shared one father, “and that is enough for us.”

LSESD also opened its first CFS in Lebanon in January, in collaboration with its implementing church-based partner in the North. Prior to formally launching this program, the team in the North had been working to establish a simple non-formal education program for Syrian children in response to the massive need for such interventions. At the time, they didn’t even have money to buy furniture, so they were using old boxes as desks.  With funding through German Baptist Aid, the center now caters to around 180 children each week continuing with its non-formal education program, but with the added components of psychosocial support, life skills, and child protection.

The CFS works to care for the children in a holistic way, also providing one-time gifts of hygiene items, clothing, and food portions for their entire family. “Of course, we can’t do everything,” shares the coordinator, “but at least we are doing the essentials.” As a part of their emphasis on psychosocial wellbeing, the program focuses on teaching the children to respect and love each other, equipping them with skills in conflict resolution.

The children also take part in creative activities such as finger painting, role playing, and storytelling; which provides them with an opportunity to express themselves. As a testament to the positive impact that this program is having, many of the   parents report that the children are benefitting more from the center than from the school in terms of improvement in their behavior and education. “It’s not just a responsibility,” shares the coordinator, “it’s a way of living to glorify the Lord and give back a small, small, small bit of what He gave to us.”

Each of these Child Friendly Spaces are operating in unstable, and potentially dangerous contexts with children who are grappling daily with issues of violence and loss. Equally heartbreaking is the reality that the caregivers regularly witness evidence of physical and sometimes even sexual abuse. But on tough days, the coordinator in Syria says he asks his team to consider, “Why are these children coming? It’s because they feel safe here. Just imagine how difficult these children’s lives would be without this CFS…”  During a recent discussion group inside Syria, the caregivers asked the parents about their hopes for their children’s futures.  One of the father’s turned this question on the team, “What is your vision for our children’s futures?”  The coordinator thought for a second before responding, “To limit or eliminate the impact of war on their lives.”

← Iraqi Refugees in Lebanon “Really - Will We Be Able to Go to School Again?” →