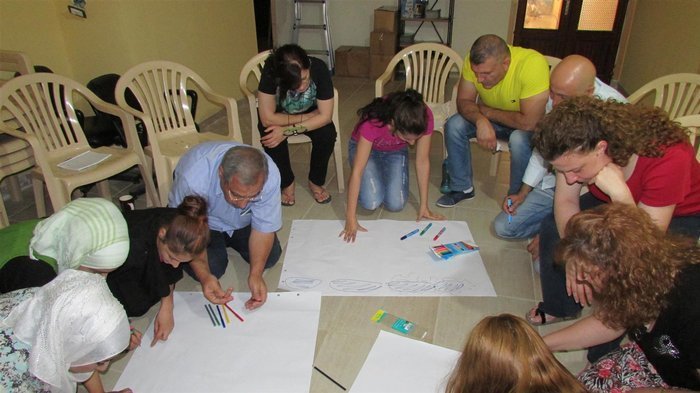 A few weeks ago the pictures of a three-year-old Syrian boy washed up on a Turkish beach dramatically brought the Syrian crisis back into the attention of the West and led to increased awareness of the need to support refugees in Europe. My time in Lebanon supporting LSESD’s work with local partners however reminded me again how important it is to also support the many children and families who have remained in Syria and the Middle East. During this trip I heard again and again how desperate people are not to be forced to leave their homes or to leave this region; many are feeling that there is little choice but to leave because resources, opportunities and hope seem to have run out. While a real solution to the crisis is essential, programmes targeting children are key to restoring a sense of hope again.

In humanitarian work, ‘child protection’ has in the past been seen as less of a priority, but preventing and responding to abuse, neglect, exploitation and violence against children during emergencies is increasingly being understood as a life-saving and critical programme in itself. During this year I’m supporting LSESD’s local partners in thinking through and implementing child protection responses as they work with Syrian children and families. It’s great to be back and supporting these partners in a more long-term way following on from the research we carried out last year which showed the serious risks to their safety children face both in Syria and as refugees in Lebanon: as well as suffering physical harm and injuries from the conflict, children are more vulnerable to sexual abuse, early marriage, recruitment into the armed forces, and many children are struggling to deal with what they have seen and heard in the places they have fled from. In the increasingly stressful and pressured living situations displaced families are living in, physical violence against children is increasing.

One of the child protection projects it has been a privilege to support is the child friendly space (CFS) LSESD has started with a team of young leaders in a conflict-affected area of Syria. In my recent trip to Lebanon we were able to hold a training workshop and retreat with this team almost one year after starting the CFS, and it’s amazing to see the impact they are having in the lives of the 240 children they are serving day by day. Much more than being simply a place for children to play, the team intentionally deliver a programme of targeted psychosocial support activities to help children recover from the experiences they have been through, and raise children’s awareness of how to keep themselves safe. One team member said, “Parents came to us and told us, ‘I hadn’t thought about these things but my child came to me and told me about them; now he talks to me more about things that are happening to him.”

This year we are also focusing on ensuring that churches and projects working with children in Lebanon are able to deal with the risks children face and the issues they are seeing relating to children’s safety. One key issue is knowing how to deal with the high levels of violence and abuse against children. In a complex context where it’s difficult for the legal system to cope with and respond to cases of abuse, it can be hard for churches and project staff to know what to do, and it might seem easier to turn a blind eye to these situations since there’s no easy or clear way to respond. One project leader told me that without a safety net, “We feel like we’re at the edge of a cliff and we could fall any time.”

Despite the difficult context, it’s been really encouraging to see that these projects are choosing not to ignore the issues they are seeing, and were excited to participate in training to think through developing approaches and systems which can help them know how best to respond. Working alongside these partner churches and organisations to come up with best practice and put policies and procedures in place which are meaningful and real in their specific context is a significant step towards protecting these children and making a real difference for these families.

In the child friendly space in Syria, we are really seeing the impact of this focus on reaching out to children. Many children have lost a parent or someone close to them, have had to leave their home, and are facing an uncertain future, and so having people who care for them and they can trust makes a significant difference. The children attending the CFS struggle with emotional difficulties and fear, and the team have been encouraged to find that they have become the people the children feel able to trust and talk to about what they’re going through. One team member said, “Often children will sit with us and cry, and we cry together.”

The leader of the team running the CFS explains that even though it can be difficult to see change in the children in the current situation they are in, “Nothing we do is wasted – even if we don’t see results now we can see them in the future. I love to be patient; I like to think that one day a child will say, “Yes, you were looking after me when I was younger.” We are hoping to set up several new CFS in Syria, recognising the importance of the hope these programmes can restore for children and families. In a very complex situation without clear answers or solutions, it’s encouraging to see hope breaking through as children are kept safe and supported to have the chance to fulfil their potential.