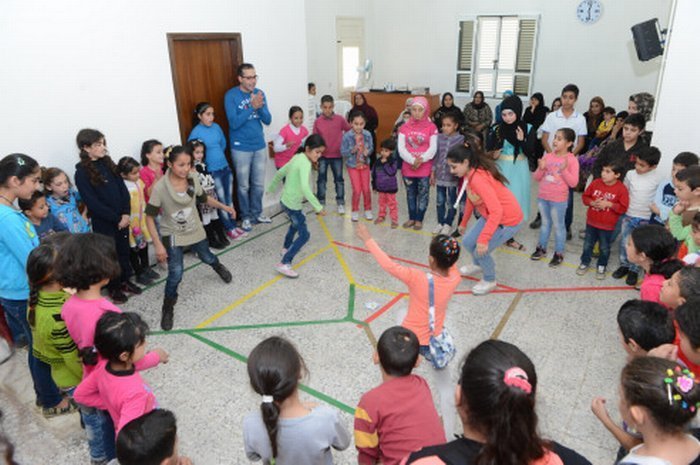 Some of the neediest children yet to attend an LSESD Christmas party came to the first event of Christmas 2015.

“The children looked very sad to begin with,” says Marina Mardirossian, who is co-ordinating all ten Christmas events. One family that stood out to her was a woman with six children, three of them blind. “I can’t forget her face and her kids who were opening their hands to receive the gift without seeing what is inside,” she says.

When the children started playing games, however, their demeanour changed. “This was a real fun time for the kids,” says Marina. “They were so happy and were laughing while they were playing.”

As well as games, at each Christmas event there is a time of worship and a Christmas message led by the church’s children’s ministry or Baptist Children and Youth Ministry. This is followed by a delicious meal. Afterwards every family receives a food voucher for $60.

Most of the children who attended were from a poor background. Some parents could not read the food voucher and had to have it explained to them.

As well as the food voucher, a pack containing a hat, gloves and a scarf to keep them warm this winter. An elderly lady came to organisers after the event asking for the hat, scarf and glove set. She said, “I want a gift please. Although I’m old, that doesn’t mean I can’t wear them. It’s cold, and I don’t have any hat or glove to put on me.” They were able to give her a spare set.

Last year’s inaugural events, which around 1,000 Iraqi and Syrian children attended, were a big success. Almost all of those children have now emigrated, so the children that come to the parties this year, will be doing so for the very first time.

Please pray for the rest of the Christmas events, sponsored again this year by Christmas for Refugees, that they will bring the joy of Christmas to children who so much need to receive it.