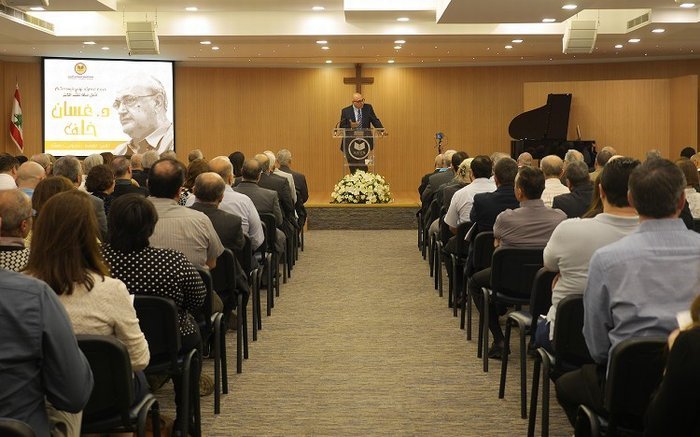 The fondness and respect for the late Dr. Ghassan Khalaf was evident at a thanksgiving service held at the Arab Baptist Theological Seminary (ABTS) on 14 October.

As guests arrived at the service, several people shared their experiences about the influence that Dr Khalaf had in their lives. And in tribute to him they praised God for Dr Khalaf saying:

“I came to know Christ through Rev. Ghassan. He touched my heart in a special way. He was an example and a mentor for me.”

“The most influential thing for me was when he was teaching in class about Jesus and his tears were flowing, and how all of us as students started weeping with him.”

“He had a huge impact on my life to the extent that I called my son Ghassan.”

When the thanksgiving service began, speaker after speaker came up to the front to reminisce on their memories of the pastor, mentor, author, theologian and Professor of Bible Studies who was also a former President of ABTS. There were also contributions on video from church and community leaders around the world who couldn’t be there. Some recalled his considerable knowledge and respected academic work on the New Testament, Ethics, Hermeneutics and the Greek Language. A picture of Rev. Ghassan’s character also shone through: “a good man full of the Holy Spirit and faith”, “a deep trust in the Word of God”, “a man of great humility” who was “open to listen” and who would point to prayer as the way forward when one faces difficulties was just some of the characteristics that were treasured by those who knew him.

LSESD’s Rosette Mansour was one of many who spoke of the personal impact Dr. Khalaf had on her life when she worked with him at ABTS. “During needy times we saw Rev. Ghassan on his knees, and during abundant times we saw him pointing to Jesus,” she recalled. “I had the privilege of working with Rev. Ghassan during good as well as difficult times that the seminary went through. I learnt from him Christian qualities that I would keep with me my whole life.”

Dr. Khalaf’s impact goes way beyond the people that spoke at the Thanksgiving service. Hundreds of ABTS graduates hold Rev. Ghassan in high esteem and he has been a major inspiration in their ministries. Thousands more across the Middle East North Africa region and around the world have been influenced by his books and his work as a translator on several New Testament translation projects from Greek into Arabic. “One of the most important books ever written about Lebanon,” was how one senior figure at the Lebanese University described Lebanon in the Bible: A Theological and Historical Study. Homiletics (The Literary Style, Key Principles of Organization and Preaching Techniques) has been widely used by seminaries on their Homiletics courses. Many people attribute becoming Christians and growing in their faith to Dr Khalaf’s books.

He not only encouraged readers but writers too. Dr. Khalaf was a regular speaker at Christian Arab Writers Initiative workshops and trainings, sharing his own experience with writers and editors. New and very well-known Arabic authors and pastors insisted that Dr. Khalaf wrote their book’s forewords and speak at the launchings of their books, something he was happy to do. “I encourage those who have a seed of the gift of writing to start working in developing it that it may grow and mature,” he said. “And may all writers in God’s kingdom know that their writing will not go to waste but will become a steadfast truth accessible to generations to come.”

Dr. Khalaf’s legacy will be truth for generations to come. Through the Christian writers he has encouraged, the leaders he has trained and the wonderful books he wrote that will continue to be treasure for those that read them, he has empowered the Arab Church. We at LSESD will continue his legacy by training new leaders, local writers and inspiring a new generation of followers of Jesus to grow in their faith and serve their communities with love.

For the first time in its history, and to celebrate the legacy of Ghassan Khalaf and his contributions, ABTS launched its first scholarship endowment program at the thanksgiving service. Find out more how it will benefit future students at the seminary.

← 20 Years of LSESD: Peacebuilding and Dialogue Grateful for Our Forefathers →