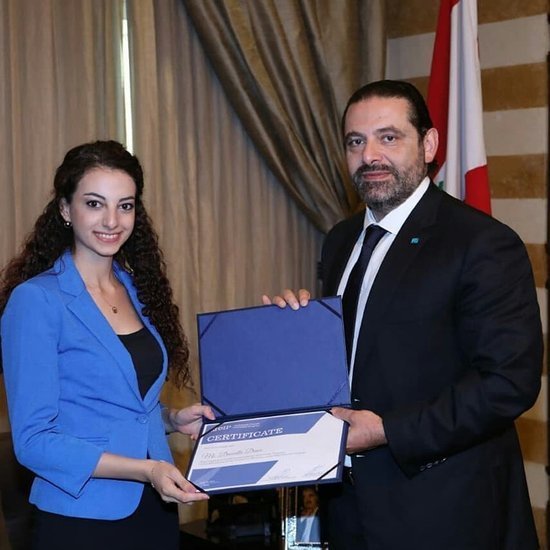 Lebanese Prime Minister Saad Hariri gave LSESD’s newest employee a Certificate of Completion today (Monday 25 June) for her work as an intern in his department.

Ms Daniella Daou worked from February to May 2018 in the International Affairs Unit at the Presidency of the Council of Ministers. Ms Daou was the only one chosen out of a list of applicants to be in the Mohamad Chatah Internship Program following her graduation from Haigazian University with a political science degree. During her three months as an intern, she was a researcher for Prime Minister Hariri and wrote reports for the international press.

Ms Daou started in June at LSESD in the Department of Partner Relations as a Coordinator. She is primarily working with two of LSESD’s educational charities: Beirut Baptist School (of which she is a graduate) and SKILD (Smart Kids with Individual Learning Differences).

“We are delighted that Ms Daou has received this honor from Prime Minister Hariri and will continue her service to Lebanon by working for LSESD,” said LSESD CEO Dr Nabil Costa.