Helping Syrian Families Get through a Stormy and Uncertain Winter 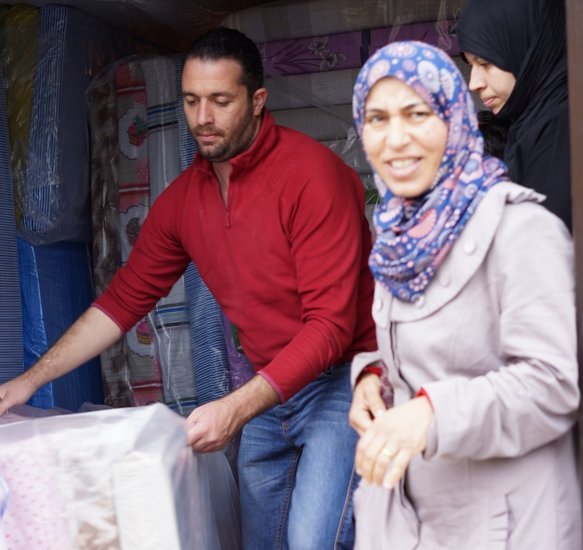 Since November, we have been rolling out a winterization programme to help vulnerable Syrian refugees get through the winter weather.  This has included:

· Providing 4375 blankets, 1235 mattresses, 200 heating stoves, and 535 fuel vouchers to Syrian families now in Lebanon that have either not received a package from UNHCR, or are extremely vulnerable.

· Providing families in colder locations in Lebanon with a winter package containing heating stoves and fuel, blankets, and winter jackets.

· Providing to families displaced within Syria 1800 blankets, 425 heating stoves, and a fuel subsidy for 715 families through our partners. The winterization items are alongside on-going food aid projects.

This assistance from LSESD comes against a backdrop of change and uncertainty for refugees.  On 1 December the UN World Food Aid programme suspended its food aid in Lebanon due to a lack of funding, meaning electronic vouchers were not topped up for December. A successful fundraising drive by the UN raised $80 million meaning the programme was restarted on 9 December.

On 5 January, the Lebanese government started to enforce new restrictions on Syrians crossing over the border into Lebanon. For the first time, visas will be required. Some fear that the most vulnerable families will not be able to escape the civil war in Syria and will be in great danger and in extreme poverty.  The restrictions have been brought in due to the high numbers of refugees in Lebanon. There are over 1.1 million people registered, but the total figure is estimated to be in excess of 1.5 million. The United Nations says this makes Lebanon the second largest refugee-hosting country in the world (it was 69th three years ago).  The number of refugees has put huge pressure on government services like health and education as well as on jobs. This has led to tension in some communities. Unknown assailants set fire to refugee tents in northern Lebanon on 7 December, for example.

Finally, after a wet November and December, the weather has recently taken a turn for the worst. A storm nicknamed Zina has brought strong winds, freezing temperatures, heavy rain and snow to the country since 5 January. Refugees who are often living in tents are feeling the brunt of the harsh conditions. That’s why the provisions supplied by LSESD’s winterization programme have been so vital.

A special word of thanks to friends and partners who made it possible for LSESD to help vulnerable Syrian families to get through the stormy and uncertain winter. We continue to seek your prayers for these families, for the enormous needs before us today, and for peace in the region!