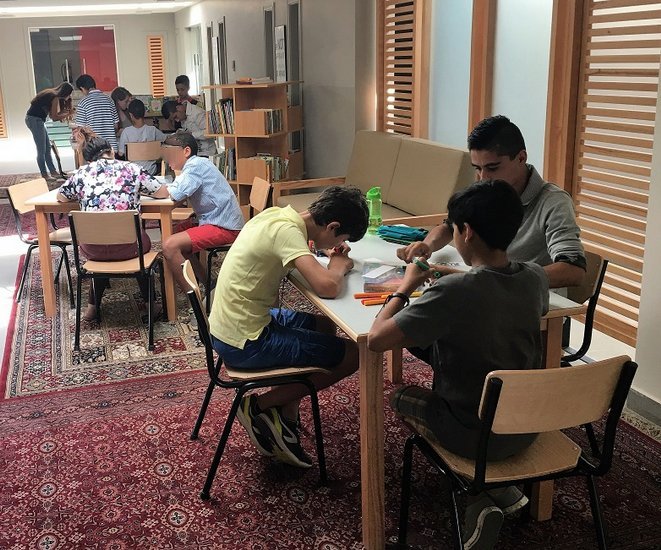 Imagine being a child who has missed 5 years of school.  If you are under 10 years old, then that probably means you have never been to school – ever.  Imagine you are a child who has no home and you live on the streets of crowded Beirut. Your only means of survival is to beg for a few pence from passers-by or dodge through traffic that has stopped at traffic lights to sell flowers you have picked from the municipal flower bed nearby.  Or imagine you are a child abused at home, or trafficked or exploited in some other way, either by parents, other family members or by total strangers – as you don’t have any family.

These are just a few of the tragic backgrounds of children who are starting at a new school that has just opened here on the LSESD campus.  The new “Hope Academy” is a joint project between the Baptist Children and Youth Ministry of LSESD; the Home of Hope a Christian run secure home which takes in children referred to it by the courts and social services, and Travis Avenue Baptist Church  in Texas, USA, which has provided the initial funding.

One of the biggest needs for these children, who all come from the Home of Hope, is an education – but as described above, many have missed out on years of school for a variety of reasons.  Some have never sat in a classroom, know nothing of ‘raising your hand to answer a question’, or even what ‘colouring in’ means.

Added to this is the fact that while some children stay at the home for many years, others are resident for only a few months.

A short extract from the original proposal will give you an idea of some of the challenges the Hope Academy is aiming, to help children overcome:

“Because our students are disconnected from the traditional family structure and most (if not all) have not developed to the usual stage for their age, the school aims to fill developmental and relational gaps as well as give students relevant skills to prepare them for future success.

This means we will have an unusual focus on life skills, character development, personal and relational well-being, health, and learning skills, as well as traditional academic subjects. It also means  favour one-on-one instruction whenever possible. This is for the student’s immediate benefit educationally, emotionally, and relationally, but also gives our staff ongoing opportunities to observe each student’s unique needs, gaps, and challenges, so that we can best serve each child God places in our care.

The school is non-traditional and is comprised of elements from Montessori, home schooling, Unschooling, and project-based learning. For long-term students, our goal is to develop their character and skill-set to become fully self-directed learners.”

At LSESD, we are very excited about Hope Academy.  As well as providing the premises for the school, staff from two of LSESD’s ministries are also involved: the Baptist Children and Youth Ministry and SKILD Center for Smart Kids with Individual Learning Differences.

Please pray for the Hope Academy, that it will give children with a difficult past an opportunity of a brighter future.