Launching “Profiles of Poverty: The human face of poverty in Lebanon”

Profiles of Poverty: The human face of poverty in Lebanon by Rupen Das (LSESD’s Director for Relief and Community Development) and Julie Davidson, aims “to understand the dynamics of poverty and allow the groups affected a voice to describe the realities of being poor. 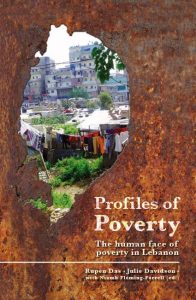 The objective of this study was to understand the dynamics and causes of poverty. We felt that the best way to do this would be to allow the poor to speak and for them to describe their world. In a country where there are heated debates about security, justice, identity and what it means to be Lebanese, this publication is meant to give the poor a voice that can be heard in the midst of all the other competing voices. While we analyzed and used the available quantitative data, the core of this research was participatory. We wanted to hear the poor describe their world.

What was obvious right from the beginning of the process is that poverty here in Lebanon and the Arab world does not look like poverty in Asia, Africa or Latin America. But it is just as real.

As we listened to the stories about the lives of the participants, we were surprised that their understanding of the problems and challenges they faced were very similar to our observations as we looked into their world. Most felt that they did not have many options to get out of poverty. They felt discriminated against, neglected and outside the social system that the rest of the country lived in. Many talked about the wars and violence that repeatedly destroyed their homes and their livelihoods. The most common emotion mentioned was that they felt that no one cared.

The fact that Lebanon as a whole does fairly well in development indicators such as the Human Development Index and the Millennium Development Goals hides the fact that there are significant pockets of poverty in both urban and rural areas, and among certain ethnic groups.

Yet poverty in a middle-income country like Lebanon is often ignored as the majority of the country is not poor. While many of the surrounding countries have oil and gas reserves, Lebanon lacks such resources and is dependent on service industries, all of which are easily disrupted by political tensions, uncertainty, violence, and conflict. This places severe restrictions on the budget available to the government to address issues of poverty.

However, there are new initiatives on identifying and responding to the needs of the poor. The Lebanese Government has just initiated the National Poverty Targeting Program, which also receives assistance from the World Bank, as well as the Italian and Canadian governments. It is meant to provide assistance to the 8% who are extremely poor. However,what makes the face of poverty different in a country like Lebanon is that poverty cannot be addressed only by ensuring access to services and subsidies, or by improving livelihoods and income. These are valuable interventions and will prevent extreme poverty but the poor will still struggle to improve their socioeconomic status enough to enable them to move out of poverty.

Poverty is multidimensional and cannot only be measured by key economic indicators alone. The understanding of social indicators like exclusion and marginalization begin to explain the causes of poverty. The confessional and communal structure of Lebanese society does not allow for social mobility. So while the poor may be able to access education up to a certain level, they are unable to move out of chronic poverty and therefore they continue to remain vulnerable. The poor belong to marginalized communities, either geo­graphically isolated in remote parts of the country or socially isolated in pockets in urban areas. They remain voiceless and powerless because those with influence ignore them.

Amartya Sen, the Nobel laureate in economics writes in his book Development as Freedom:“Central to the challenges we face in the contemporary world is our idea of an acceptable society”. He then goes on to ask a question that I believe should be at the core of any national agenda. “What can we do to make society more tolerable?”

In Lebanon, an understanding of social justice is es­sential if poverty in the country is to be alleviated rather than allowed to become even more deeply ingrained. As we have seen events unfold across the Middle East in 2011, exclusion, voicelessness and marginalization are the very traits that eventually lead to social upheaval. Bearing this in mind, Lebanon needs to ask exactly what kind of society it wishes to create and just where do the poor fit into the national agenda.

← Humanitarian Aid to Syrians: Update and Reflections Serving with Love →