Ministering to those who Minister to Refugees 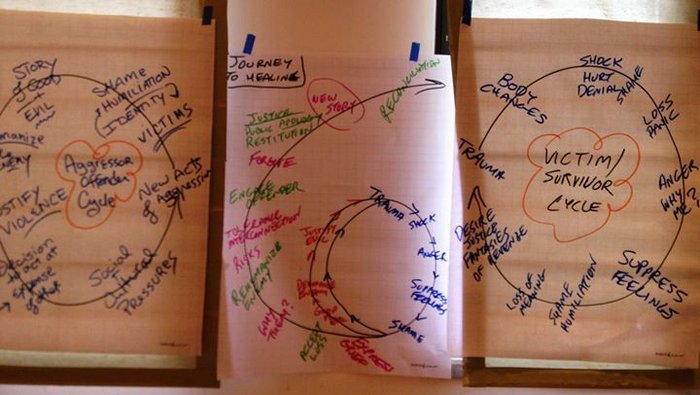 Lebanon, along with so many countries in the Middle East and Europe, has been receiving refugees from Syria as well as other war-torn lands.  Some countries have been gracious hosts, and others have tried to block or redirect the flow of desperate people looking for a safe haven.  About one in every four people in Lebanon is a refugee.

As the worst refugee crisis since World War II challenges us, we in the church would do well to remember that Jesus was a refugee.  As a child his parents fled with him to Egypt to preserve his life from the death squads of King Herod.  As Croatian author Boris Peterlin put it, our Lord is “RefuJesus.”  That reality should shape our theology, our ethics, and our ministry amid this crisis.

Sharon and I spent January in Lebanon, teaching at the Arab Baptist  Theological Seminary and conducting workshops on conflict transformation.  MERATH, LSESD’s community development and relief arm, invited us to lead two two-day workshops related to ministry among Syrian displaced people and refugees.  The first was with church leaders and community workers in Syria, the second with those ministering among refugees in Lebanon.  We focused on trauma, trauma healing, and self-care for those serving traumatized people.

We used the difficult story of Rizpah in 2 Samuel 21.1-14 to explore the trauma dynamics of victim/survivors, of aggressor/offenders, and of those who while traumatized act in transformative ways that bring healing and open up new possibilities.  We were deeply moved by the contemporary stories shared, especially the ways that church leaders cared for vulnerable people even while suffering their own dislocation, losses, and challenges.

On the second day of the workshops we shifted into “secondary trauma,” the pain that comes from listening to so many heart-wrenching stories.  Eventually your soul can get ground down.  When coupled with the stress of constant issues to deal with, too few resources for too many needs, and sometimes our own personal traumas that get triggered by the traumas of those we seek to help, then compassion fatigue can set in.  How do we are for ourselves when we are the care-givers?

We can’t share much of what happened.  One pastor told about his church building being destroyed and most of the congregation being displaced.  Yet ministry was still taking place, and the church that remained was growing!  There were many tears that brought healing as we created together a safe space to let out some of the pain and struggle in the context of a caring community.  We used tools such as “people sculptures” and “mirroring” to enable participants to give physical expression to emotions sometimes too deep or too raw for words.

RefuJesus, along with Mary and Joseph, found sanctuary in Egypt, something that today’s Egyptians are proud to honor and commemorate.  As churches and faith-based NGOs serve the refugees and those dislocated by war, they are serving Jesus.  Jesus said, “As you did it to one of the least of these who are members of my family you did it to me” (Matthew 25.40).  These folks are heroes of our faith, but they need care and support as well.  They need encouragement, prayer, and sustaining love to keep up their good work at the front lines of human need.  Do not forget RefuJesus as he is among us today in the form of those fleeing violence.  And do not forget the selfless heroes who minister day in and day out to “the least of these.”

Dan and Sharon Buttry are Global Consultants with International Ministries of the American Baptist Churches.  They work around the world equipping churches and Christian leaders in conflict and community transformation.