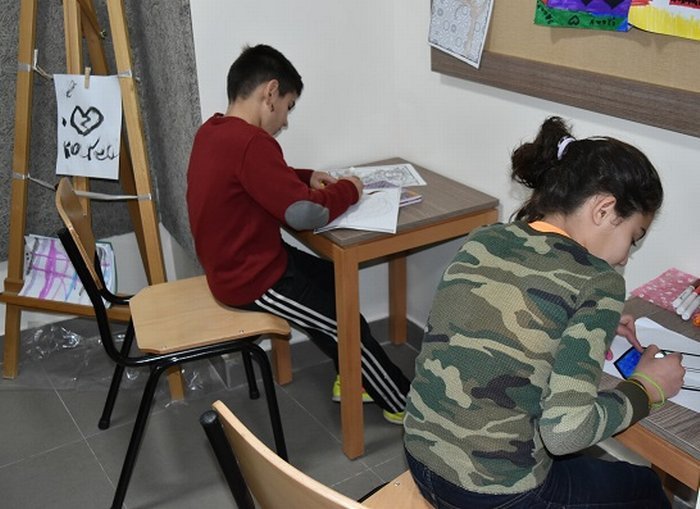 When your personal life is a mess, learning is hard.

Many children at the Home of Hope (HOH) orphanage in Lebanon know this to be true. Separated from difficult family situations, most of them are at the home because of a court order or after a brief time living rough on the streets of Beirut. The trauma they are trying to cope with is affecting their behaviour and their ability to learn. Many of them have been away from mainstream education for some time and would really struggle if they were to return to an environment of sitting in class and taking tests. There is a high probability they would perform poorly, be disruptive and risk being suspended or expelled.

LSESD’s Baptist Children and Youth Ministry (BCYM) is responding to the children’s desire to learn and improve themselves. In a partnership with Home of Hope, Travis Avenue Baptist Church, and SKILD Center not only did they start the Hope Academy in September 2016 so the children could get schooling, they are now trialling an internationally respected method of education to help younger children feel at ease with learning, to enjoy it and to flourish.

The Montessori method, named after its creator the Italian physician and educator Maria Montessori, has been used all over the world for the last one hundred years, but is not common in Lebanon – Hope Academy is one of the few places in the country using it. Its approach is quite different. Instead of being in separate year groups, children aged 6 to 10 are all taught in the same class. It is mostly individualised child-centered learning – their classroom is divided into different zones (literacy, sensory, Maths, language etc) children can choose to spend time in, depending on their interest. Children do not face tests or have work graded – rather they are assessed indirectly through recorded observation.

The advantage of Montessori education is that it takes the pressure off children, allowing them to adapt to learning and to enjoy finding things out for themselves. It also encourages them to teach others in the class, so they learn from each other, as well as from the teacher. The focus is not just on academics but on life skills and developing character.

The first Montessori class at Hope Academy is being taught by someone who is passionate about it. Rima quit her teaching job in Lebanon as she was disillusioned with the lack of success she was finding with mainstream teaching methods. After studying Montessori for two years in Egypt, she returned to Beirut, got a job at Hope Academy and is now able to implement what she has learned. She was confident that Montessori teaching could help the children at Home of Hope and this has certainly proved to be the case.

“These kids are empty vessels,” says Rima. “Most of our kids have traumas and lots of behavioural problems. They need a lot of affection, they need someone to be there for them, and of course they need academics, because they don’t know anything. I knew that Montessori methods would work.”

Working with a class of nine children, Rima’s focus has been finding ways to make them feel calm and happy to learn. Since the class started in September, she has started to see  results. Six-year-old Mikhael* has progressed well in his reading and is now able to read sentences. Eight-year-old Marina* was very introverted and did not talk at all. Now she has started talking, drawing and expressing herself through art. “She even sang a song in class yesterday,” Rima says. Three children who have graduated to the classes for 10 to 14 year olds at Hope Academy, which use traditional teaching methods, have adapted well after learning the Montessori way.

Hope Academy Education Director Brady Black is pleased with the progress the children in the Montessori class are making.

“This is the first time I have seen it up close [Montessori] and I have been really impressed with it,” he says. “Rima has been able to get the kids learning and being calm. She is improving their social and life skills as well as their academics.”

Rima hopes that Montessori methods will not only help these children academically, but improve their self-esteem as well.

Pray for Rima and the rest of the Hope Academy team supported by BCYM, as they help improve the troubled lives of HOH children and enable them to have a brighter future.