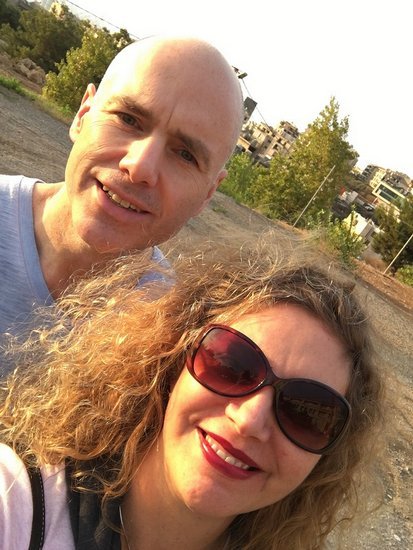 I fell in love with Lebanon at first sight. All of Beirut filled my bedroom window in ABTS as I stared out in astonishment at the panorama of high rise buildings crammed together on a wide mountainside peninsula that fell away to the sea just beyond. It was incredible and I would never be the same again.

That was my first visit to Lebanon in 2014, a short trip made possible by my work for Tearfund (a U.K. based INGO). Our team spent an incredible few days visiting projects supported by LSESD and run by local churches, all of which were meeting the needs of Syrian refugees fleeing war across the border. In story after story we heard of tragedy and loss, of fleeing from danger, of leaving with nothing but the clothes on their backs, and of now enduring the utter desperation of living in a land not their own, where they have no right to work, and are reduced to living in makeshift shacks and dilapidated buildings.

We also met the amazing Lebanese Christians who were laying down their lives to serve their Syrian neighbours; ordinary people from ordinary churches who were giving all they had to help those now in greatest need. I was humbled, astounded, and moved to tears by the love and compassion being shown, and all without condition or cost to the refugees.

One church in particular captured my heart. What had once been a ‘house church’ of 60 people who met in a flat near the Syrian border told us that the influx of refugees to their town had taught them what it truly meant to be church. They had bought land and built the first two floors of what would become a 5 story structure. It already housed a school for refugee children, as well as a sanctuary and meeting rooms from which they were distributing food parcels, offering vocational training, visiting refugees to help with housing and psychological support, and meeting basic health needs. Some of the congregation had even given up their jobs to serve the 600 refugee families full-time, and one man described with tears running down his face how he spent every day visiting families and doing what he could to help with anything they needed.

The memory of that church and its incredible congregation stayed with me when I returned home to Scotland, and I thought of little else for the next 2 years. At every opportunity I told people what I’d seen, and how I knew that God was working in the midst of war and tragedy to bring something incredible to life.

In October this year I returned to Lebanon, to LSESD, and to that church, this time with my husband who wanted to see for himself what had so captured my heart. To my joy the church building now stood complete, operating as a full-time hub of activity and support for 1,700 refugee families. The work now also includes a food parcel distribution centre as well as two community centres, located next to refugee tent settlements, housing classrooms for basic literacy and employability skills, as well as a children’s playground and a second hand clothing store. It is a powerful example of what happens when the people of God simply choose obedience and unconditional love in place of unforgiveness and fear.

Despite this and similar incredible church-led projects supported by LSESD, there are still too many refugees who have not received any help at all. Consider that this one church, working to full capacity, is meeting the needs of 1,700 refugee families in an area where there are 100,000 refugees. All of this in a country where most refugees can no longer legally register to receive food and medical help because it costs them $200 per person over 15, per year to do so. Without God the situation is impossible.

I returned home from my second visit to Lebanon even more besotted than before, and thankfully my husband has now joined me in this passion. Our love for the people, both Lebanese and Syrian, our respect for LSESD and all who work there, and our belief that God is at work in the most amazing way on the very frontline of a hideous war means that we will definitely return. In the meantime we are committed to pray and spread the word about what we’ve seen, and I ask you to join us in anyway you can.