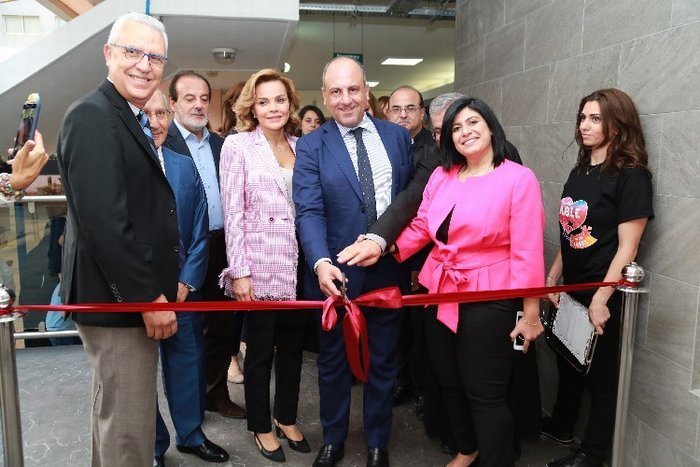 The opening of fantastic new facilities for children with learning differences at LSESD’s Beirut Baptist School (BBS) and the launch of an exciting new program for them has heralded a new chapter in the school’s commitment to inclusive education.

On 24 October 2018, BBS launched the SMART Program in collaboration with SKILD Center and Open Minds in an event on their campus sponsored by His Excellency Mr. Marwan Hamadeh, Minister of Education and Higher Education in the caretaker government.

The SMART Center is for all students with learning differences. It includes a sensory room and kitchen area, group counseling rooms, special education areas, a speech therapy room and a psychomotor therapy room. Overall, the Center has been designed to meet the characteristics of children with Autism Spectrum Disorder (to enhance their association and perception difficulties), epilepsy, Down Syndrome, Dyslexia, attention deficit, ADHD and other behavioral difficulties. Its pastel colors give a soothing atmosphere for the children who can have tantrums when a place is crowded.

From the SMART Center, the school will have a specified and individualized program to support learners with special needs including Autism, Epilepsy, and Down Syndrome. The SMART Program entails two parts: the first is a self-contained program where the learners are taught only in the Center; the second is where learners who are less at-risk are included in regular academic classes with a shadow teacher. Special educators will also work with the students in the self-contained program to integrate them in extra-curricular activities in Grade 1 regular classes, when their cases allow that. Both groups will be supported by group therapy, speech therapy, and psychomotor therapy, as well as being helped to develop their communication and interactive skills.

Representing the Lebanese Government at the SMART Program’s launch was His Excellency Mr. Pierre Bou Assi, Minister of Social Affairs. “Learners with special needs are the bridge between us and humanity,” he said in his speech. “They are a source of pride and we should help them to achieve their full potential.”

Other speakers included the Secretary General of Catholic Schools, Father Boutros Azar who described the new SMART Program and Center as “a new hope in education.” Ms. Ghaida Rabbat, President of the Board of Open Minds, said that the organization was proud to be involved in the project and she wished that all schools in the region will follow the example of BBS in its approach to achieve “true academic inclusion.”

Dr. Khalaf’s impact goes way beyond the people that spoke at the Thanksgiving service. Hundreds of ABTS graduates hold Rev. Ghassan in high esteem and he has been a major inspiration in their ministries. Thousands more across the Middle East North Africa region and around the world have been influenced by his books and his work as a translator on several New Testament translation projects from Greek into Arabic. “One of the most important books ever written about Lebanon,” was how one senior figure at the Lebanese University described Lebanon in the Bible: A Theological and Historical Study. Homiletics (The Literary Style, Key Principles of Organization and Preaching Techniques) has been widely used by seminaries on their Homiletics courses. Many people attribute becoming Christians and growing in their faith to Dr Khalaf’s books.

He not only encouraged readers but writers too. Dr. Khalaf was a regular speaker at Christian Arab Writers Initiative workshops and trainings, sharing his own experience with writers and editors. New and very well-known Arabic authors and pastors insisted that Dr. Khalaf wrote their book’s forewords and speak at the launchings of their books, something he was happy to do. “I encourage those who have a seed of the gift of writing to start working in developing it that it may grow and mature,” he said. “And may all writers in God’s kingdom know that their writing will not go to waste but will become a steadfast truth accessible to generations to come.”

Dr. Khalaf’s legacy will be truth for generations to come. Through the Christian writers he has encouraged, the leaders he has trained and the wonderful books he wrote that will continue to be treasure for those that read them, he has empowered the Arab Church. We at LSESD will continue his legacy by training new leaders, local writers and inspiring a new generation of followers of Jesus to grow in their faith and serve their communities with love.

For the first time in its history, and to celebrate the legacy of Ghassan Khalaf and his contributions, ABTS launched its first scholarship endowment program at the thanksgiving service. Find out more how it will benefit future students at the seminary.