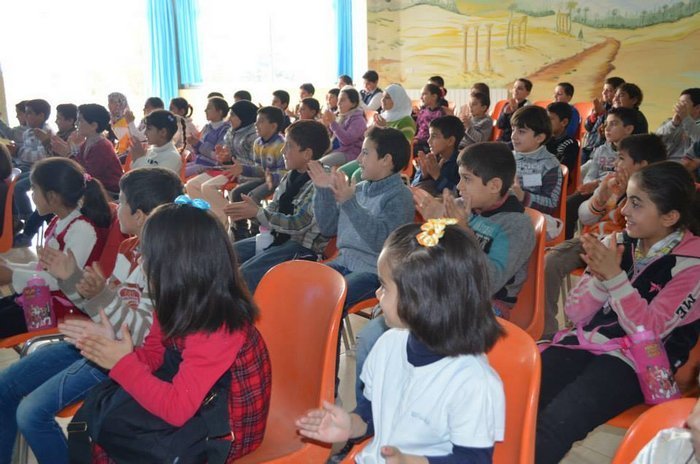 The crisis in Syria has been in the news for a while now and each time a new story or report is shared it is heartbreaking. However, the hardest thing for me to comprehend is the toll it is taking on the children. These are innocent lives that didn’t ask to be born into this or grow up with war and strife marring their lives forever. The reality still remains that they are living in a time of great uncertainty and are growing up much too fast. It is not uncommon during the day to see children wandering the streets selling goods or seeking work. When most young people are in school refugee children are struggling to survive and sometimes are the only breadwinners for their families. Our relief team interviewed one mother in Beirut who shared her story. “We fled Syria because we were starving and there was no bread. When we first came to Lebanon we had nothing. My eldest, a boy [age 15], was working at a local bakery, but was injured several days ago (a cut on his head) and can no longer work. My two younger sons [age 7 and 10] now work selling tissues in the street. My husband is sick and doesn’t work—he had a breakdown and he is always getting angry and shouting at the family. I don’t know how to read or write. I looked for work for myself but couldn’t find it. My son offered to work… I don’t want my children to beg. My children work, praise God. Things have changed for my children. They were taken from their schools, and now they struggle for bread. We can’t pay for the food because of the rent. In Syria, the house was ours, but now, there’s a landlord. And if you don’t pay, he’ll kick you out. And only these two children are working. If my 7 year old doesn’t come home, I fear for his life”.

The level of poverty at which refugees are living is very high. All thoughts go to how to find food and not much beyond. Most families left everything behind when they fled Syria so they come with literally nothing and have to work to buy the least thing to put in their shelters. There is no money for any extras or for special activities. Survival is the key.  Toys are not thought of much as most children know they are extras and not necessities. However, even friends are not found easily for refugee children. “Sometimes I can’t find a Lebanese girl to play with – when they find out I’m Syrian they don’t want to play” shared one nine-year old girl living in the Bekaa Valley.

Lack of education is not the only way in which refugee children are suffering. Emotionally, many need time to process all the horrific things they have seen and heard. In Syria, bombs and missiles were heard all the time and some saw their friends and family members killed in front of their eyes. “My children are more aggressive and active here in Lebanon, more noisy, because here there’s no place to go and because I’m afraid for them. And they remember things from the war. There they had nice friends to play with, here they don’t have any friends” shared one concerned mother now living in Beirut. Parents just want their young ones to be safe and have a chance to escape the devastation that has overtaken their country so some parents even send their kids away and other kids try to escape because their parents were killed and they have nowhere else to go. Some of our partners in poorer areas of Beirut noted high levels of early marriage for financial reasons among families they are working with, saying that marriages of girls at 14-16 years are very common, and another in the Chouf region knew of a number of families who had married girls as young as 12 years old. This is not the ideal solution but it is happening more and more as parents fear for the safety of their children, especially the females as often they are at risk of being raped, kidnapped and sold. Some families even keep their children inside their homes at all times because they fear for their safety even going out to play. This is so difficult for kids who need time to run and play and let out their energy.

In light of all the devastation and distress taking place for the refugees, there are many ways to help provide some hope and comfort in the midst of darkness. LSESD’s Baptist Children and Youth Ministry (BCYM) does just that. BCYM holds three camps a year specifically for Syrian refugee children in which kids can enjoy a fun, safe environment. During one such camp, one child received the sandwich served at mealtime and asked to leave so he could go share it with his family. These kids are in such need and want desperately to help their families too.  In between these camps, there are 10 follow-up events where volunteers from BCYM can spend more time with the kids that attended the camps in hopes of fostering relationships and building trust so the children have a safe place to share and be encouraged. Though there are almost 500,000 refugee children, just in Lebanon, our BCYM team is dedicated to helping as many as they are able to reach. If you are interested in being a part of this team and serving the refugee kids and their families through BCYM, please let us know. Mission teams from churches and organizations are welcome and encouraged to participate in the camps. For more information contact us at LSESD. Thank you for your support and encouragement as we seek to be salt and light!

← Summer Camps for Vulnerable Children That They May Have Hope, Once More →