Responding in a Time of War: The Impact of the Church inside Syria 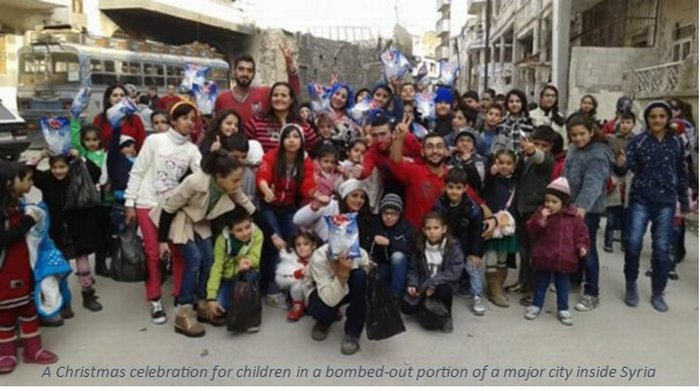 “Future generations will judge us if we fail to respond.”

In the midst of headlines from inside Syria filled with unthinkable violence and horrific carnage, another, more hopeful story has been quietly unfolding since the onset of the crisis.  It is the story of churches who have responded to the humanitarian imperative and call of God, and have been laboring tirelessly since the beginning to meet urgent needs on the ground.  Year after year they have worked to provide continuous food assistance to families with empty cupboards on the verge of starvation.  In the cold winter months they have visited families who were burning sticks to keep warm, offering blankets, mattresses, and fuel for their stoves.  They have dug wells in besieged areas when water supplies were cut off as an unlawful act of war. They have paraded with singing children through bombed-out streets determined that even now, the voices of future generations cannot be silenced. They have offered words of encouragement, words of prayer, and psychosocial support for the comfort and healing of people who have lost everything that they once held dear.  They remain the pillars of faith in the midst of this turmoil, and they have not closed their hands to those who are in need (Deut. 15:11).

The impact of this witness has been astounding.  Although not all churches have seen growth in their congregation numbers, all have witnessed a transformation in society’s view of the church as an ezer– a help in time of great need.  This shift in perception has been particularly striking for churches who have chosen to reach across sectarian lines in providing assistance- caring for the Shi’a, Sunni, Alawite, and Yazidi as much as for their own.  Moreover, in some cases, the common mission has helped to unite churches across traditional and denominational boundaries that previously separated them.  Many churches have chosen to coordinate and to work hand-in-hand, openly acknowledging that the task is too great for any one community of faith on its own.  Additionally, this work has been a great source of hope, not only for those on the receiving end, but also for those who are serving.  Courageous souls who feel called to this ministry have chosen to remain inside Syria despite the danger and uncertainty that has enveloped their country.  They actively refuse offers of asylum and safety elsewhere as they believe that the Kingdom of God is at hand.  It is present in the work that they are doing. Why would they leave at such a time as this?

Over the past four years, LSESD has been privileged to partner with over twenty churches, from various confessions and denominations, to help provide assistance to over 6,000 families inside Syria. This joint relief response has included ongoing food assistance and hygiene kit distributions in locations across the country; well-digging projects in besieged areas; annual winterization projects providing heating essentials in the cold winter months; and child friendly spaces where war affected children can receive psychosocial support along with experiencing the right to play. While implementing these initiatives, LSESD’s church partners have gone above and beyond in not only offering life-saving support, but likewise providing a loving community and safe haven for vulnerable families who have been battered by the storm. Their vivid testimony to thousands of families will no doubt extend far beyond the current crisis, and it is the great joy of organizations like LSESD to be able to join hands in connecting these courageous partners to the resources and support of the global church in this mission of great compassion in a time of great need.