The IMES Mission, from Integral Formation, to a Movement for Integral Transformation 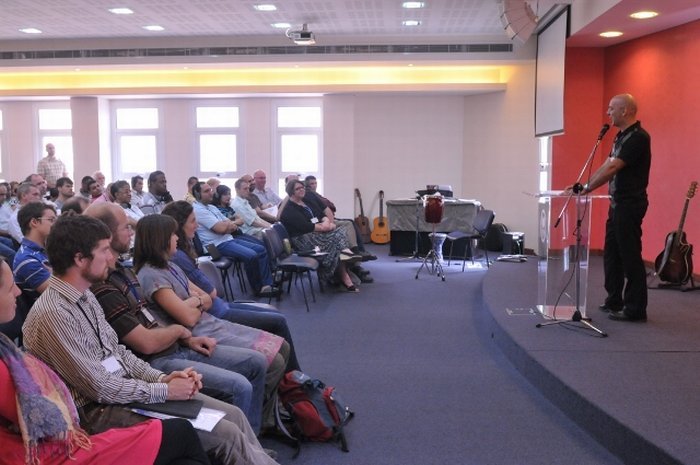 The Institute of Middle East Studies was, from the start, established at the Arab Baptist Theological Seminary in response to a deep felt need for a more integral approach to mission in Lebanon and our region. As Evangelicals, we have focused primarily on the oral proclamation of the Gospel, inviting people to believe in the Lord Jesus Christ to obtain salvation. This is indeed a crucial part of the Gospel’s call, whose importance I would not want in any way to downplay. When the frightened jailer in Philippi threw himself at the feet of Paul and Silas after the earth shook and the shackles of all the prisoners he was responsible for had come undone, he begged them: “What must I do to be saved?” Paul and Silas’ response was: “Believe in the Lord Jesus, and you will be saved – you and your household” (see Acts 16:25-31). But the jailer’s problem had not been an intellectual one. By inviting the jailer to “believe,” Paul was not offering him the solution to a cognitive problem. The jailer had come face-to-face with God’s just verdict on Paul and Silas, whom he had been guarding as criminals. And the man who, in verse 27, had been ready to throw himself on his sword in despair was, by verse 33, joyfully prepared to lay down his life for them. Such was the price of his discipleship. He took them, washed their wounds, brought them into his house, set a meal before them, and he and all his family were baptized (vv. 32-34). By God’s generous providence, the magistrates of the city had reached the same verdict by morning. Otherwise the jailer would have been sure to lose his life over the impertinence. The Gospel is certainly powerful to call us OUT OF our former ways. Who among us has not seen people saved and delivered from things, situations and states that no one but God could have gotten them out of? But it seems to me that we often forget to stop and ask ourselves TO WHAT God has called us. In summary of his own calling, Jesus declared in the words of Isaiah:

“The Spirit of the Lord is on me, because he has anointed me to preach good news to the poor. He has sent me to proclaim freedom for the prisoners and recovery of sight for the blind, to release the oppressed, to proclaim the year of the Lord’s favour” (Luke 4:18-19)

The Lord sure had anointed him! He was the Messiah, the mshiha, which in Aramaic means the “anointed one.” But Jesus knew he had been anointed for a powerful purpose. Preaching good news to the poor was going to transform the poor forever. Their state of poverty would cease to describe adequately their redeemed humanity. Prisoners would be freed, the blind would see, the oppressed would be released, the entire creation would become the object and recipient of the Lord’s favour! Can we possibly be satisfied with a one-dimensional mission when our redeemer’s personal manifesto was so integrated in its vision for human transformation?

The Institute of Middle East Studies has embraced from the beginning God’s strong calling to “bring about positive transformation in thinking and practice between Christians and Muslims in the Middle East and beyond.” It emerged due to our strong desire to be more faithful to how God would have us involved in the transformation of our country and region, even the world.

Being part of a theological seminary, IMES’ mission is primarily educational in nature. This past June, we held our tenth Middle East Conference, an important landmark. Since IMES was established 10 years ago, we have held an annual conference with the aim of leading our constituencies from around the world through a paradigm shift in their thinking about Islam and Middle-Eastern realities. Our conferences have tackled topics such as Islam, both traditional and current, regional mission, youth work, and women’s issues; but also peacemaking, human rights, Islamic law, and religious liberty. Our goal has been to offer, not merely techniques for mission in the Muslim world, but primarily a deeper and more balanced understanding of the region and people that God has called us to embrace with the Gospel. In 2004, we established an Arabic language school, the Academy of Languages and Practical Skills (ALPS). Our belief is that those called by God to minister to Muslims need to be equipped with the Arabic language as a bridge into the culture and heart of those to whom they are called. In our effort further to equip key leaders for the Church globally, we have also run, since 2007, a practicum program for students from seminaries in the West, the Middle East Immersion (MEI). Our purpose is to give them the opportunity to get a better grasp of the region and to explore their calling for this part of the world.

In October 2012, we launched a master’s program, the Master of Religion (MRel) in Middle Eastern and North African Studies. The program has already attracted students all the way from Brazil to Australia, from the UK to Upper Egypt. The MRel is not a traditional degree in religion or theology. It is a program that equips professionals with skills in interreligious and interdenominational dialogue, project design for relief, development and peacemaking, cultural analysis and ethnographic research, all in the context of an in-depth exploration of regional history, politics, economics, and MENA Islam and Christianity. In August 2012, we ventured into the world of the social media, and since then we have maintained a blog with weekly posts, offering insight and analysis into current regional affairs that touch upon any of our 3 goals of education, peace-building and human rights advocacy. It has become clear to us that we cannot be the hands, heart and mind of Christ in this region without addressing, not just issues of evangelism and discipleship, but also of poverty, conflict and politics, human rights abuse, contemporary slavery, the sex trade and child trafficking, refugees and migrant workers.

Finally, one of the great gifts of the past 10 years has been the wealth of friendships and relationships we have been able to cultivate with Muslim clerics, academics and politicians, for whom we have sought to exemplify the presence and heart of Jesus. We have ceased to perceive them, as well as ourselves, according to the flesh (2 Corinthians 5:16). We do not relate to them as though we belonged to two competing faiths in conflict. Rather, having died to ourselves and now belonging to Christ as new creations (v. 17), our mission to them is one of hospitality, presence and embrace. We long to see them, as well, dying to themselves and to the religion of their forefathers, and being reborn in the Spirit of Christ, for “flesh gives birth to flesh, but the Spirit gives birth to spirit” (John 3:6), and the Father seeks the kind of worshippers who will worship him “in spirit and in truth” (John 4:24).

As we celebrate 10 years of acquiring and passing along an integrated perspective of Islam and regional realities, we are increasingly feeling stirred to take our integral mission further. This new season to which we feel God is calling us would move us from reflection, education and formation, to modelling transformation and catalysing a movement. Our dream is that this movement would so challenge the dominant consciousness of the societies and cultures around us, that our peoples would awaken to the radical alternative that Jesus can bring to their reality at all levels, from personal and familial, to social, economic and political.

← Save the Date: 2014 Middle East Consultation Writing Ensures the Continuity of the Word →