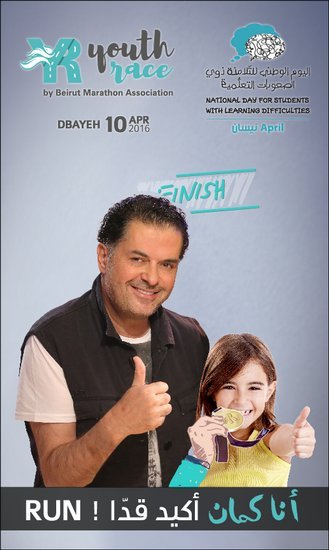 The Beirut ‘YouthRace’ was the first event to mark this year’s National Day for Children with Learning Difficulties in Lebanon, a day that was launched four years ago in partnership with the Ministry of Education and British Council to appeal for the right of all children to an equal education in Lebanon. This year, SKILD was grateful to receive the support of Lebanese Superstar Ragheb Alemeh, President of the Beirut Marathon Association May El Khalil, and Minister Elias Bou Saab who each spent considerable time promoting SKILD’s cause to the public.

As the sponsored partner of the Beirut Marathon Association’s YouthRace 2016, SKILD played a prominent role in the promotion and media coverage for the event. The Association’s overwhelming support for SKILD’s cause went as far as altering the race’s start banner to spell ‘STRAT’. The generous gesture was designed to demonstrate the challenge of Dyslexia and to encourage the race’s 8000 participants to begin a conversation about inclusion.

Cheered along by supporters with placards and lively music, individuals and teams dressed in the distinctive yellow t-shirts ran, jogged and walked across the finish line. Following her achievement one young runner remarked: “I’m so glad that this cause is finally getting the coverage it deserves, I ran for children with learning difficulties so that that they would know that they’re capable of having a bright future just like everyone else!”

With the widest participation and media coverage to date, the message behind SKILD’s national campaign has reached more people than ever before. As the momentum of the National Day for Children with Learning Difficulties builds, SKILD hope to radically change a nation’s perception of learning difficulties so that all students are able to access the bright future they deserve.

← A Five-year Journey that Started with a Step of Faith! Fast Runners, Funding Announcements and Facebook Campaign Make Fourth National Day the Biggest Yet! →